Oh Paris. I have long wanted to travel and see you. We knew ahead of time which museums we wanted to hit and when so we could spend the maximum amount of time there. So when we arrived in Paris on Thursday the 12th we started with lunch at a street side cafe before going to our flat we were renting. From there we headed out to the Musee d’Orsay which has the largest collection of impressionist paintings in the world. (Swoon)

Which I was biting at the chomp to see. It did not disappoint; Monet, Renoir, Suerat, Manet, Van Gogh, Degas and so many more. It made me giddy and my interior designer heart squeal with joy to see an art neaveou decorative arts display and the salon paintings were breath taking. 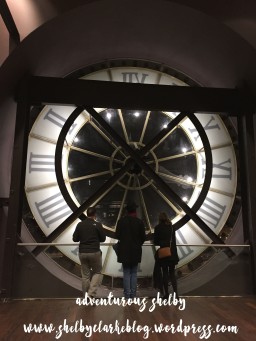 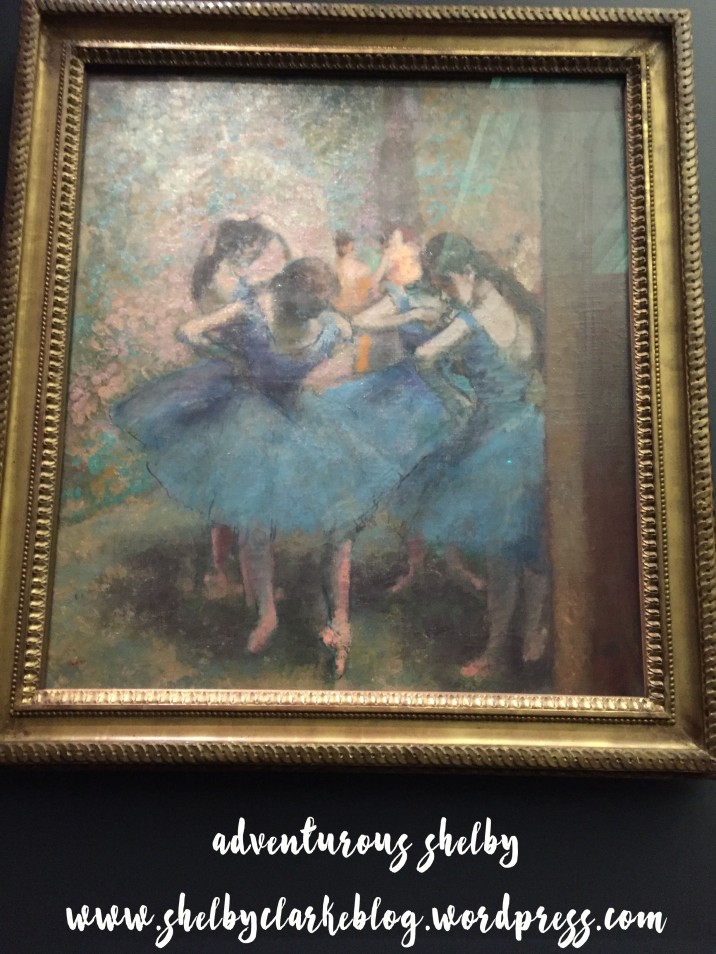 We managed to walk through it a bit quickly in around 3 ish hours but I could have spent the day. We kind of had to get through it quickly as we got there at 6ish and they closed at 9:30 I think. Afterwards we took the metro back to the Bastille and walked to our flat, passing my In Laws at the restaurant just below their hotel.

On the 13th we planned the whole day start at the Louvre then visit Notre Dame and revisit the Louvre if we needed to. But we wanted to try and do stuff with Travis’ parents, they mentioned the Picasso museum so we headed there first. But they needed to buy train tickets for an excursion the next day so we beat them there and walked the museum just as they were just getting in. So we had lunch at the cafe there, which was a little pricy but the conviniece is worth it. (NOTE: If you plan to travel to Paris and plan to visit a lot of museums the Museum pass is totally worth it and you get to skip the long lines)

We then decided to tour the catacombs, what better day than Friday the 13th to see the remains for approximately 6 million people in the empty underground limestone quarry? We walked the 3 miles from the Picasso to the catacombs on the other side of the Seine, through the Latin quarter where we stood in line for a hour. And again as we finished mom and dad were almost about to enter, they by the way took metro there instead of walking the 3 miles like we did. Since we had done that we still wanted to get in the Louvre which was open late on Fridays, so we took metro there, our feet were pretty tired. We had seen online the ‘must sees’ and decided to do that first, then we could enjoy the other pieces. We walked by the moat wall without realizing it, it was not labeled nor was there an explanation to its significance. We also walked a portion of the Egyptian artifacts, including a real mummy and sarcophagus. EW! We peeked into the Louis XIV apartments and Marie Antoinette apartments, before heading to see the Venus, Winged Victory, Mona Lisa (which I have been told for so long is so small like 8×10 sized when it’s more like an 11×14). 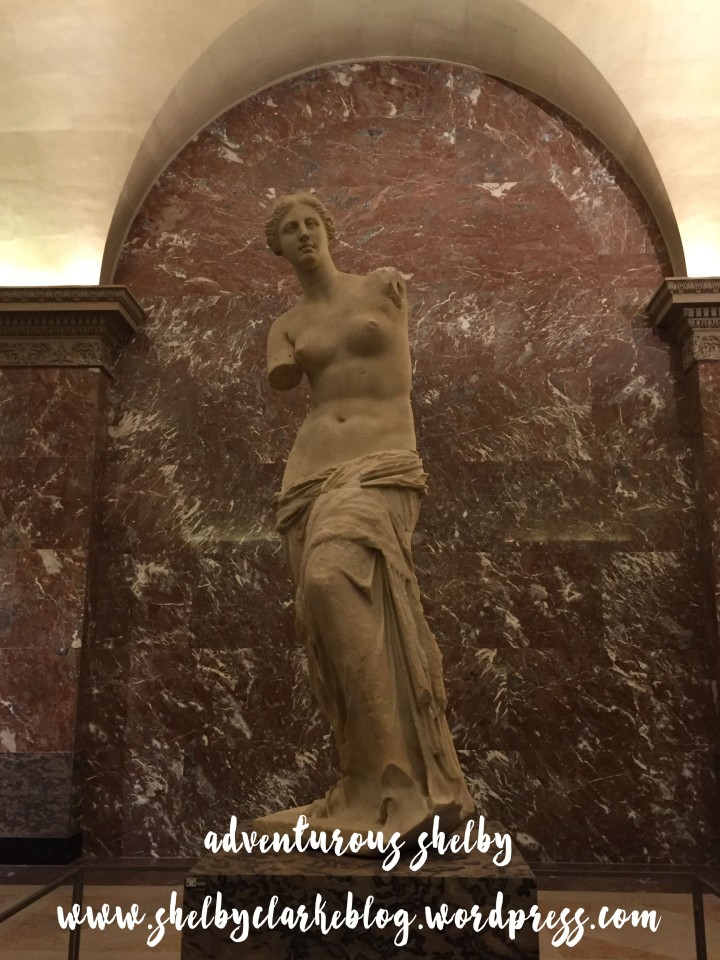 I was disappointed how far people were restricted to standing to her as it was the details like the thickness of the paint and the grain of wood or canvas that made the impressionist’s and the Picasso’s and other paintings come to life (for me). We found the Vermeer which is actually REALLY small, and enjoyed some amazing statues from the late neoclassical period.

After a quick viewing of the Louvre, we determined you do actually need an entire day to do the Louvre properly if not more time. We zipped through the d’Orsay and were content with that, although I could go and sit in front of Monet all day long. Even though our feet hurt and we were very tired we decided to zip over to the Arc de Triomphe because we were close and wanted to see the view at night. We got there about 9:45 ish and made it to the top in about 5 minutes, I thought I’d do circles for the rest of my life going up those spiral staircases. The view at the top was spectacular. And we were able to see the Eiffel Tower sparkle for the first 5 minutes of the hour at 10 pm.

Little did we know what was happening at Stade de France or at the Bataclan theater just blocks from our flat in the 11th district near the Bastille. The first we heard about it was a text from Kendra as we exited the metro at rue de roquette asking if we were ok. Thank God for a friend in journalism.

This site uses Akismet to reduce spam. Learn how your comment data is processed.

I don’t know what you need to hear today so hear this:
I've been loving you for quite some time...
When rebranding there were a few things I really wanted to keep in mind. One was the fact that I love and live a messy life, nothing is perfect, and I reflected that in the main script font I chose. Another thing I wanted to highlight was style can be simple, it doesn't have to be complicated. And that living more simply and focused on the things that matter are more fulfilling than endless amounts of stuff. So I removed all the clutter from my branding and put the words style & simplicity in a simple to read sans font.
💦Why do we need to wear our clothes longer between washes?
👗Inclusivity in fashion sizing is a hot topic then you add in inclusivity sizing into the ethical and sustainable fashion sphere and it gets even tougher to discuss. As more and more people, regardless of size, move toward a more sustainable and ethically made wardrobe it becomes increasing harder for some to find items made in a size to fit their body.
Loading Comments...
%d bloggers like this: